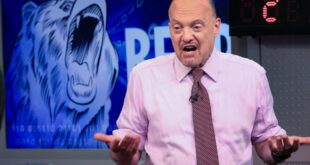 The government will end its giveaway of Covid-19 at-home tests Friday because of insufficient congressional funding, a senior Biden administration official said Sunday.

A stockpile of the tests is being depleted, and officials want to have enough on hand in the event of a fall surge, the source said.

The giveaway, which includes tests mailed at no cost to recipients who request them at Covidtests.gov, will end Friday, according to an announcement on the site — unless there’s a surprise round of funding from Congress, the source said.

“If Congress provides funding, we will expeditiously resume distribution of free tests through covidtests.gov,” the source said. “Until then, we believe reserving the remaining tests for distribution later this year is the best course.”

CNN first reported that the Biden administration was blaming Congress for the end of the program.

The administration official who spoke to NBC News castigated Congress.

“The administration has been clear about our urgent Covid-19 response funding needs,” the source said. “We have warned that congressional inaction would force unacceptable tradeoffs and harm our overall Covid-19 preparedness and response — and that the consequences would likely worsen over time.”

Fewer people are testing for the coronavirus, and many are believed to have had it without knowing conclusively. In fact, experts believe many Americans have been reinfected at this point in the pandemic.

Dr. Anthony Fauci, the president’s chief medical adviser, has said he believes Covid-19 will be a seasonal occurrence, like the flu.

With the halting of distribution Friday, the vast majority of people in the U.S. would still have the option of free testing or getting reimbursed through private insurance, Medicare or Medicaid.

The federal government has distributed an estimated 600 million tests through its Covid-19 test website.

Previous How to blog about travel? How to host a tv show about travel?
Next What happens next for Bed Bath & Beyond depends on this week’s strategic update, Morgan Stanley says